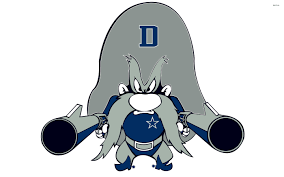 On Sunday I came across a story that flat out ticked me off. Makes me want to fire both barrels in frustration! You may have read this very story which was in a Dallas newspaper. In light of the situation with Zeke, this writers story didn’t help the quagmire around Zeke. It’s not his job to boost Zeke, but it shouldn’t be to put a dagger in his back either.

The story was about the activities of Zeke over the last year which has led to talk of the possibility of a suspension. What frosted me was his wording in this story. He wrote about the St Patrick’s day parade (Mardi Gras style) and here’s what he wrote: “Elliott grabbed a woman’s breast during a St. Patrick’s Day parade“. I’ll be technical, but he didn’t “grab” the girls actual breast, but he did expose her breast by pulling her strap down. Wrong no matter how one looks at it, but to me physically grabbing a woman against her will is far worse. How he wrote this up was in a manner that put Zeke in a worse light to someone who hadn’t seen the video to judge for themselves. Funny part was there was a link to the original story whose title correctly read ” Elliot seen exposing a woman’s breast“. He then wrote the following: “Sources said he was involved in an altercation that left a man with a broken nose at an uptown bar six days before the team left for Oxnard. Dallas police have suspended the investigation due to the lack of a complaint and an inability to contact the victim”, Now the way Monday actually played out, it was one person who said it was Zeke that hit the man, then in a few hours another bystander stated that Zeke was nowhere close to the victim when he was struck. Another person said that someone reached around Zeke to hit the victim. What’s the truth? Didn’t seem to matter to the reporter to provide his readers with all that could be found. Yet, you didn’t get that from that writer. The reporter, who has actual access to the team, isn’t doing his homework from where I sit and is doing a disservice to Zeke & most of all, to his readers. The commish isn’t basing his decision on what this individual writes but fans read his words and he makes things appears worse than they may actually be. Words paint a picture.

It really irks me to see such lazy reporting and forming the narrative in such a way to make a player/person appear guilty when the facts weren’t all in.  There was a rush to judgement when the news broke about the club fight, without corroboration & a police report.

What we saw on Monday was Lucky Whitehead being released in less than two hours of news breaking that he had shop lifted in Virginia and a warrant was out for his arrest. Now, Lucky had a few past issues which had him on a short lease obviously, but he wasn’t afforded the opportunity to prove his innocence. I felt that it happened in part, following the grilling that Jerry, Stephan & Jason took on Sunday morning and the team bypassed their normal investigation procedures and went right to the release. Was it to appease this type of writer and others in the media? In less than 24 hours the Virginia police department vindicated the former Cowboys player known as Lucky Whitehead. Had it not been for this false identity situation, Lucky would still be on the field today. But how’d the police get all his personnel information? Strange? This is not to say that he was making the 53 this year. My report during the draft said his days were all but over in Dallas, but the team may have wanted to snare a late round draft pick from a desperate team in August. The media, frothing at the keyboards and their vlogs may have cost a man his job on the first day of camp. I’ve not read any story’s in the last few hours but I bet they’re saying that the Cowboys “jumped” the gun on Lucky. Can’t have it both ways, yet the media tries anyway!

I think I presented my case against this type of reporting. Did I unload both barrels? You’re the judge, let me know your take ……

The good news of the day was that Jourdan Lewis’s trial wrapped up today and he was exonerated of all charges! Might just have the pads on for tomorrow’s padded practice.