Demarcus Ware – Where Does He Rank? 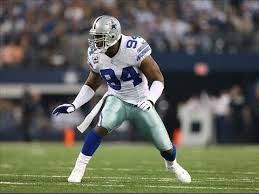 Today Demarcus Ware announced his retirement and while part of me was saddened another part said, why not. Too many post season surgeries to endure and be who he was. Not going into his stats, they’re there for all to see. Let’s take a look at the 5 greatest defensive lineman in Dallas Cowboys history.

I’m not giving my order, as I’d like to see what you all have to say. Let’s have some fun and duke it out in the comments section. You have to start with Mr. Cowboy himself, one Bob Lily. He was incredible to watch beating double teams routinely and realizing the man didn’t lift weights. Pure natural strength, regardless of less than buffed out arms. I had the good fortune to be in the press box one day at Tulane Stadium watching him tear up the Dolphins line, which eventually led to a sack of 29 yards. Then come the first set of triplets in Dallas, who just so happened to play on the D Line in the 70’s and 80’s together. None other than Ed “Too Tall” Jones, “Beautiful” Harvey Martin & Randy White. In the Super Bowl against Denver, they battered, beat and harassed Craig Morton enough to earn the Co-MVP award for the game. The fun of those three was watching the race to the QB, man that was something special and not seen since. White was doubled and triple teamed and still was a force while taking on that many enemy combatants. That gave those two towers of power the ability to man up and slam QB’s to the turf.

Demarcus was a one man wrecking crew in his own right. Problem in his tenure in Dallas is that he was often the only above average player on the defense and although he’d be classified in the “elite” category teams were able occasionally to mitigate his effect on a game. The bigger the down, Ware would warrant double and triple teaming.

I won’t submit my list top to bottom until we engage a few people into them selecting their top five, in order. By all means, disagree with my selections if you’re willing and you think you can! So let’s have some fun!