Key to Dallas Victory Is Straight out of Football 101!

When you really need a victory, go back to the basics! That’s exactly what the Cowboys need to do in Sunday’s clash with the 49’ers. This isn’t a game for exotic “X’s” & “O’s”, just plain old fashioned hard nosed basic football. The Cowboys lost two games almost all the fans had marked down in the wind column as soon as the schedule came out. Now we’re in a game that is needed to prevent the season from going on life support. The recipe for football victory can often be defined as the team that dominates the line of scrimmage, wins the game.

In Dallas, we went into the season believing we had the best offensive line in football. The bubble’s burst a little through the first five games while introducing two new players to the unit. But now is the time to prove its still among the elites. Nonetheless, they need to rise to the oaccassion and get their jobs done. To win this game the Cowboys have to dominate the LOS and pound the rock, down after down. 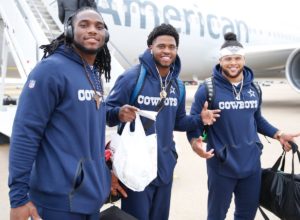 P.S. – My dad was a Brooklyn Dodger fan and from birth I was a Dodger fan too. As long as dad was alive we bonded over the Dodgers and since his passing I’ve not had that same passion with “our” team. I keep one eye on them, but not like I used to. Come Tuesday night, I’ll be watching from time to time and thinking of dad. He always amazed me in that he could remember the batter, the count, the score, the inning, the opposing pitcher and able to describe a single play, that single defining moment in a game, played 20 or more years ago. He never forgo a big play! He taught me that the only World Series that mattered was the Dodgers vs the Yankees. Sadly that match up won’t be happening this year. I’ll still be rooting for the Boys of Summer and remembering those magic moments talking with dad who loved few things more than his Dodgers! That’s what made sports so special for me and millions of others, that time to bond with your dad!

They’re Back! Early Look at the Battle by the Bay!
Back to Basics Delivers a Dominating Victory!