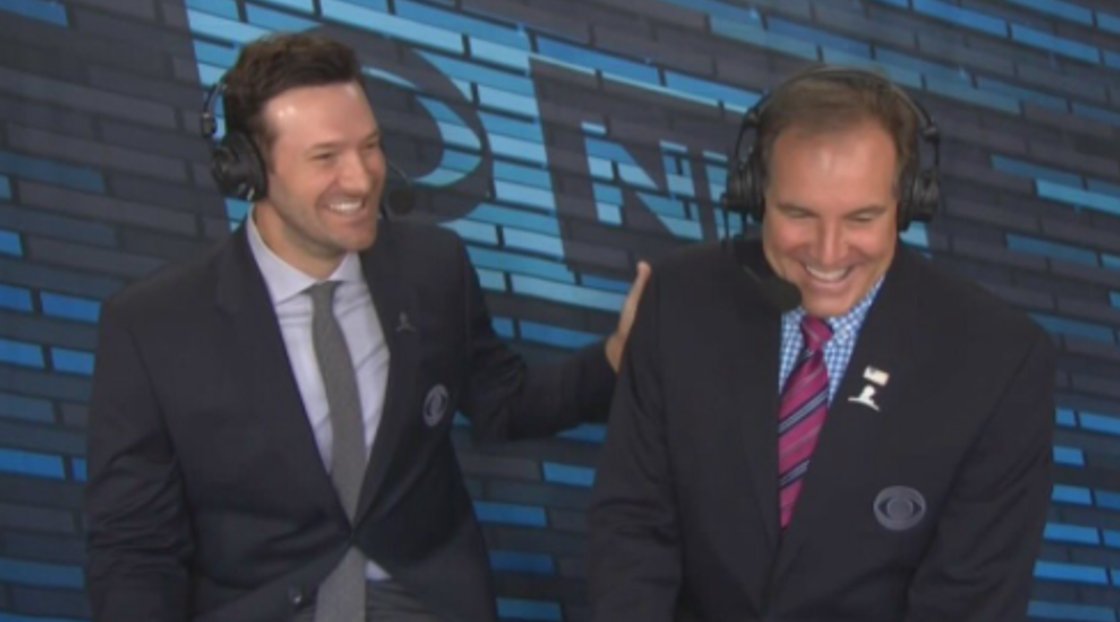 Sunday was a great day for the Cowboys, new one’s and old too! The long awaited first game for Tony Romo in the CBS booth finally came yesterday in a match up with the Raiders & Tennessee. The hype was rolling for months that he’d be a natural, he’d be terrific and others said he couldn’t rise to that level. Opinions were out there that it was impossible to start as the #1 analyst and be any good without any experience coming up the ranks. Certainly a few people are eating some crow following his debut performance.  He was easily more entertaining than most of the guys in the analyst’s chair. I enjoy Troy’s work and Darryl’s too, a little Dallas bias can’t hurt as they do a really solid job.

Personally, I watched & listened to the game and there was a lot of fun things, insightful moments and some things he’ll tell you he needs to clean up. For the first real time, live effort, opening weekend game in the #1 analyst slot, he did a terrific job. The clip below was a few of the many plays he was calling based on what he saw going on pre snap. When you’re that much a student of the game, played 14 years, watched thousands of hours of film, yeah, you’ve got an educated idea where the weakness is and the type of plays to counter that. Have a clip below that will enable you to hear his take if you missed it yourself yesterday. Supposedly the greater Dallas area was shut out of this game.

What Tony did that was rather effective was bringing a new voice to the team and a new excitement to the way the game would be broken down. Anyone, can break down a play after its run, but how about calling it before the play and being right as much as he was. You couldn’t wait to hear what he saw on each subsequent play. Frankly, that’s how I watch football, trying to analyze what the next play is. That’s half the fun of watching a game, right or wrong. Where I thought he was particularly on point was when analyzing how and when the Titans needed to call a time out to give them even the slimmest of hope, late in the game. They elected not to do as Romo laid it out and they went quietly to the dressing room instead. Here was a guy who had more come from behind wins from 2006 thru 2014 than any other QB in the NFL.  You realize he had it all pretty well figured out late in games and why he was successful when the chips were down. Knowing what and where to attack based on the time remaining, the score, position on the field, etc. He gave the viewers great insight, quickly, into all the information to process and execute. Well done!

He was really good, yet there were a few times that he got a little folksy or used the phrase, “you know”, but that can be corrected. I liked the folksy, light hearted delivery as I prefer someone being more human, more genuine. Few of you may remember an ole Cowboy QB, named Don Meridith, Dandy Don to many. He was a breath of fresh air in the booth and Tony was a little like that, without trying to imitate Meredith. He let his personality come out and we probably didn’t see that a whole lot in Dallas in front of the media.

My only concern for Tony is that in giving us a look into an upcoming play, he said the following and I’m paraphrasing, I’ll bet five dollars that they run this play to the left. He was correct but lets be realistic here, the “Commish” is likely to suspend him a few games for his attempt at making a wager on a play. Clearly the “Commish” is trying to set a record for how many Cowboys, past and present he can suspend in a calendar year. Not sure if it will be a 4 game rip or if the courts will vacate the judgement. At least Lisa Friel won’t be involved in this investigation!

Worth The Wait! Cowboys Dominate Giants!
Laying Down D Law!