Cowboys Are On a Roll, while Atlanta’s Suffering from Super Bowl Hangover!

Another week, another must win! The Boys are on a three game roll and they are going to have to scratch & claw to get this win in Atlanta. Last weeks “statement game” will mean virtually nothing if the team boards the plane back to Dallas without a “W”. Nor can they look ahead to the Eagles game. Also factor in that this is a game against an NFC opponent that needs this game to fight back into playoff contention themselves. Expect them to be playing for their playoff lives in this game too. Or is that devastating second half embarrassment still crippling their season? Same personnel for the most part and individually many fine players. No matter, two teams will face off for their playoff lives. Don’t see anyone making it in with a 9-7 record at the moment. May need the right 10 wins to get the final spot too!

The news came in on Thursday afternoon that Zeke was denied a stay in his hearing. Its been a most bizarre situation which has become more the legaleze of all that centers around Article 46 of the CBA, than innocence or guilt or any semblance of fairness. Now there’s no doubt that Zeke is out for at least a few weeks with the next court date on December 1st. As of now, his return would be for the Seattle game. 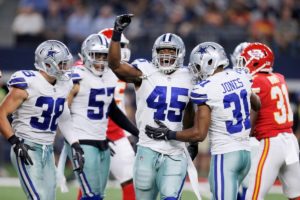 Fortunately, the Cowboys have quality RB’s behind Zeke and Alfred can do really well behind the zone scheme. McFadden does his best in man blocking and Smith says, just give me the ball! We must be reasonable as I’ve said previously, it could take a few possessions or more for them to get in sync as a new group on a regular basis. I’ve been watching the All 22 and Zeke just gets in position, shows the patience then hits the hole. Will another guy rush the hole before the blocks are in place?

It’s looking like Tyrun is out of the game with a groin injury, which puts Chaz Green in his place. Provided Chaz can stay healthy prior to the coin flip. or does he injure himself getting on the plane? Have to make Bell active just in case Green doesn’t survive the coin flip! Don’t get me wrong, Green’s pretty good, just can’t stay healthy.

Many of the key’s to the game don’t really change week to week given the make up of the Cowboys.  Without Zeke, I’m sensing its the defense that has to repeat their performance from last week to have a chance to win this game. Its the defense that has to bring home the victory. I’ve said it many times, if you want any chance to win on the road, then you absolutely have to pack your defense!

There’s a slight concern I have with Dez’s injury. Here on Friday, he practiced. Dez says he’s good to go, but until we all see him out there and running strong routes, its got to be a concern. We know we’re without All Pro, Ezekiel Elliott. It’s likely we’re without All Pro, Tyrun Smith. If its up to Dez he’s in, but its Britt’s call. It could mean three All Pro’s are out of this contest.  If these three men are out and the Boys pull out the win, you really have to accept that the team is pretty darn good! A deep 53 ……

Let’s get to those keys:

Conclusion: I see Dallas on the rise and Atlanta as the lost souls coming into this game. Not taking them lightly as their season hinges on this outcome as their 4-4. Here’s their last four games. They lost to the Dolphins and Jay Cutler, do I need to say more? They only scored 7 points against New England who’s defensively been a mess. They barely squeaked by the Jets, a real head scratcher there and lost to their division rivals from Carolina by 3. We’re a very good road team more times than not. I’m not seeing us continuing our streak of 28 plus points per game, so we can’t afford a missed FG in this contest. If Nugent keeps it clean, I see a narrow victory of 3 points or less.

This is a game where the coaches have to produce their best game of the year!

Tape Don’t Lie! Final Review of the KC Game
Whipped & Bull Rushed, On The Blind Side!